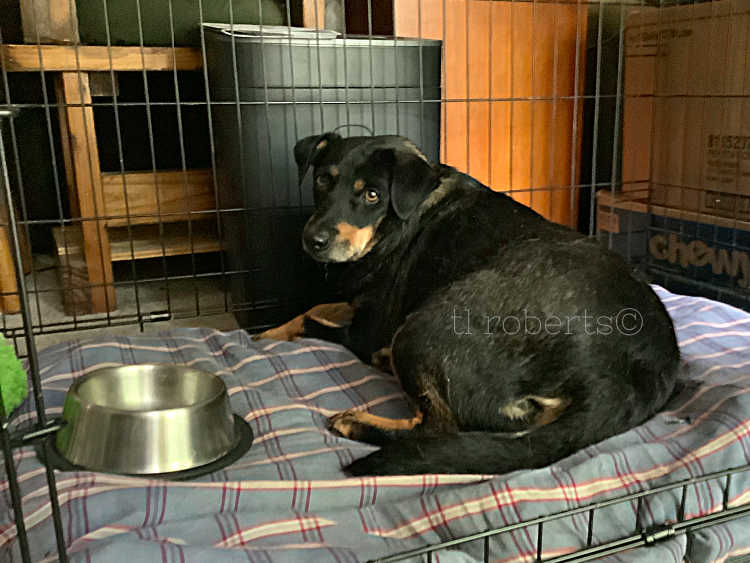 Not quite two weeks ago, we welcomed a new resident to our Island of Misfit Toys.

Joining Asta, Issy, and Mia and Sayuki, is Dani – a 40 pound, 2-year old beagle/dachshund mix. She is very timid. Not just timid, but painfully timid – timorous.

The staff at the animal refuge where we adopted her, told us she had recently given birth to a litter of five pups, but had rejected them. The babies were taken from her so they could be cared for by human nannies.

We don’t know what other conditions she was living under before she came to the refuge. Later, we came to believe she was outside, and perhaps in an abusive situation.

If Dani were human, I would easily believe she was going through postpartum depression. She is withdrawn, melancholy (if dogs can be melancholy), and frightened being inside or outside.

We set up a kennel for her near the living room activity so she could see us, but would have a safe shelter if she didn’t want to be out among us. We keep the kennel door open during the day to give her freedom to walk around. It took her several days before she’d come out and join us. We also added a second dog bed in the living room so she’d have somewhere to lie down.

Dani has only twice attempted to go outside or come back inside on her own, we normally have to carry her. When she gets outside she may pee or poop, but most of the time she just runs to the farthest corner of the yard and hunkers down.

I’m reluctant to put it this way, but we weren’t given the full story about how “damaged” she was.

While I don’t believe the refuge staff out right lied to us about the severity of her condition. I do think they downplayed it, or omitted pertinent information. Her behavior is so acute that we considered taking her back to the refuge because we felt we were ill-equipped to help her. We were afraid we would make matters worse.

It was our son, who, for lack of a better word, shamed us into keeping Dani, and that we needed to be more compassionate and patient with her. Our son, who has gone through bouts of severe clinical depression, felt immense empathy toward the little nugget and told us in no uncertain terms, that we were not allowed to give up on her.

So, our efforts to integrate Dani into a loving home have doubled. We’ve begun to measure any behavior change in “baby steps.”

I’ve done some research on canine depression. All the recommendations make a lot of assumption on how highly functioning the dog already is. We haven’t gotten Dani to the point where she will do basic things like go outside on her own, forget putting a leash in her. About half the time, I still have to start out hand feeding her before she’ll eat on her own.

I’m in this for however long it takes. Dani deserves to feel safe and loved. Right now though, I simply don’t know if what I’m doing is helping.