“He (Jacob) had a dream in which he saw a stairway resting on the earth, with its top reaching to heaven, and the angels of God were ascending and descending on it.” ~ Genesis 28:12 NIV 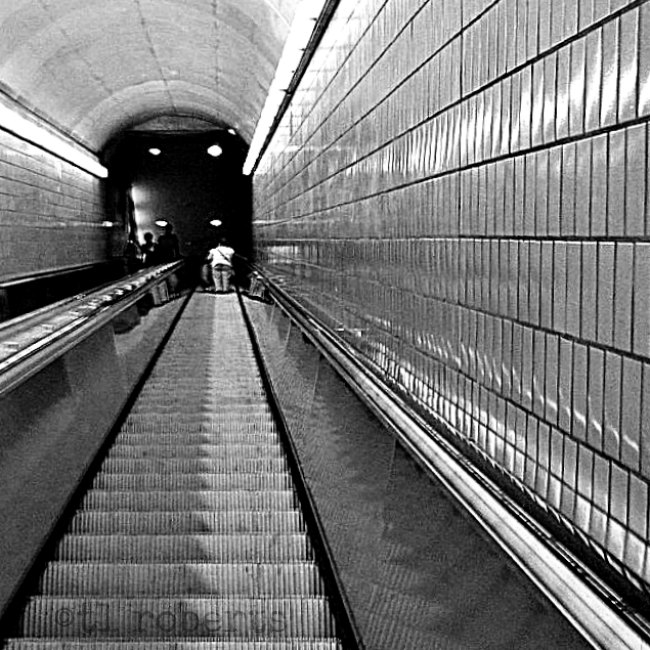 She stood at the bottom of the people mover looking up at the lights.

Her guide fidgeted beside her, a large clipboard held in the crook of his arm. He pressed his Bluetooth earpiece, anxiously listening to his instructions. Nodding in agreement to a voice only he could hear, he checked off names as each new person boarded the escalator.

“What happened to the stairway?” She couldn’t hide her disappointment.

“We had too many complaints about it being too high.” His impatience showed in his pursed lips and eye rolls. “That, and so many people arriving at once tended to bog down the line.”

“Seems wrong somehow.” She shifted from foot to foot, not wanting to take her place in the queue.

“A lot of newcomers felt that they had already done all the hard work just to get here, why should it be so strenuous to make it through this final leg of the journey. It’s not like they needed the exercise.”

“Seriously?” She opened her mouth to complain further, but thought better of it, her eyebrows creasing her forehead in a frown.”

“I mean, why bother?” Her guide stopped the line to address her grievance. “There is no sickness, or pain here. There is no arthritis, no diabetes, no limitations because of age, or weight. We also eliminated all the pushing and shoving that happened on the stairs. You just get on the escalator, and ride to the top.”

Looking around the landing, her thoughts drifted.

“This is all so depressing,” she said. “I guess I was expecting more. You know, a chorus of cherubim, a celestial glow, something heavenly. This is all so impersonal, industrial. It looks more like a subway station than the entrance to the Pearly Gates.”

Seeing her dismay, the guide took pity on her.

“We don’t normally do this,” he said leading her toward a darkened corridor. “Others like you have asked to us to ascend in a more traditional way. The stairway is not completely abandoned. If you want to enter the Gates that way, I can have an acolyte take you there.”

Standing on the first riser, she looked up toward the top of the stairway, hidden in a bank of thick, white clouds. As she ascended the steps, the light surrounding her intensified, and she could just make out the sound of angels singing.

The higher she went, the further away the top seemed.

“It’s not like I have anywhere else to be.” She smiled and kept climbing, her heart growing lighter with each step.