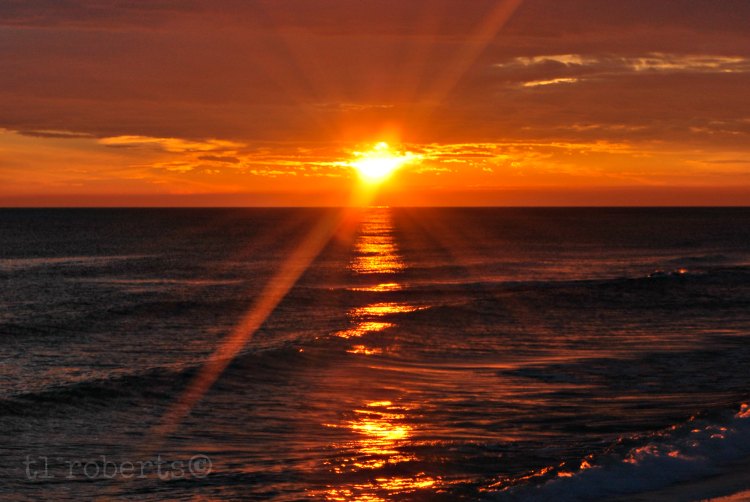 The sky darkened from a warm gold to a fiery crimson sending uneasy whispers through villagers gathered on the beach. The sun was slowly sinking toward the horizon, a solemn end to the 100-year Light Day, Once the light was extinguished in the ocean, the world would be plunged into a perpetual night for the next 100-years.

Not all the villagers had faith in the myth and instead believed that the dimming of the sun meant the end of their world. Micel was a heretic. He preached the Apocalypse to all who would listen, foretelling of oceans boiling and the heavens crashing to earth.

His wife, Wira was a believer and was passing that tradition to their daughter Linza. They were at the water’s edge, waiting for the darkness to cover their world.

High above the crowd on her mother’s shoulders, Linza buried her face in Wira’s hair, feeling as sleepy as the sun. The last strains of the lullaby the villagers sang fading with the waning light.

An angry voice cried out from the seagrass berm.

“You didn’t heed my warnings,” Micel threw handfuls of sand in the air. “This is not the beginning of The Dark Day, it is the End of Days!”

Micel pushed through the crowd, becoming more agitated and frantic as he tried to find Wira and their daughter.

A pathway opened up as villagers backed away from the raving man.

“Wira, come away from the water!” MIcel tried to pull Linza off Wira’s shoulders.

Wira swung the little girl down and sat her behind her. Linza hugged her mother’s legs, peeking around Wira’s body to watch her father raging. High tide was ebbing and the water lapped at their ankles as the two backed away from Micel.

“She needs to be frightened,” Micel reached out, fists clenched. “Her world is going to die.”

“It doesn’t matter,” Wira said, backing deeper into the water.

“How can you say that?” Micel opened his hands, beseeching his wife to stop.

“If the world ends,” she said. “It ends. Linza will have no awareness of this. If The Dark Day begins, we are prepared and Linza will know only that for the remainder of her life. It will be a good life.”

“The Darkness is only the absence of the sun, not of Light and not of Life,” Wira pulled Linza out of the water and into her arms, and stepped toward Micel. “You can add to the gloom, or you can be a spark of brilliance.”

Micel backed away. Desperate to get away from Wira, he pushed through the other villagers.

“The darkness shall crush you all,” he screamed, then ran away from the beach, never looking back.

Wira watched him go, drowning in the darkness.

The last glow of the sun flamed out in a whisper just as bonfires were lit, illuminating the village. A cry of joy rose from the crowd.

Far outside the field of the blazing bonfires, the sound of the village voices reached a mad man’s mind and his heart broke under the weight of The Dark Day.

3 thoughts on “Be the light”