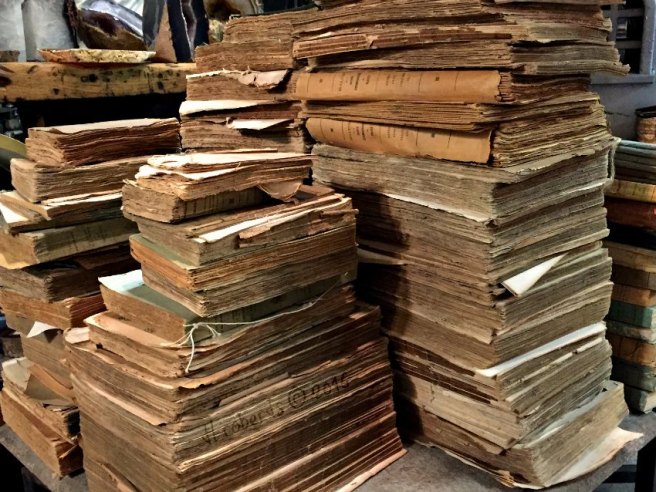 Sitting among the old and crumbling books, Jacob lovingly laid his hand on the tallest stack sitting on a wooden cart. Sounds of marauders filtered through the hundreds of shelves of abandoned stories. The raucous ruins now the antithesis to his once somber and silent sanctuary.

The last remaining phantom library, the Grand Canton Repository housed the whole of the written knowledge from the last four millennia in corporeal form. The main gallery was a long as a soccer pitch and as wide. Row upon row of books rose three stories down the longest walls. Ladders hung on rails around the stacks giving access to the highest shelves. Filling the center were dozens of study tables, illuminated by halos of light from green, glass shaded lamps, flanked by more shelves.

Younger than the standard librarian, Jacob was dressed more for adventure than archiving books. His cargo pants pockets bulged with catalog cards, rubber ink stamps and pencils. His shirt, stained with ages of mildew and foxing, was passed down through generations of Repository administrators. A faded and wore brown overcoat completed his ensemble

Jacob served as sentinel over the teetering pile of books, the last records remaining from 2016. Within the brittle pages was the secret to restoring the order to the chaos that had settled over the world.

Jacob could hear the vandals coming nearer. Shelves began to fall like dominos, sending reverberations through the library. He felt every sickening thud like a gut punch. The final shelf crashed mere feet away, books and torn pages scattered around him, their words showered down as wartime chaff.

When the vandals rounded the fallen bookracks, Jacob put himself between his precious tomes and the intruders. Their expression of surprise and confusion was gratifying to Jacob. They thought the Repository was uninhabited. He considered them the trespasser, he had the right and authority to be in the Repository.

As the vandals drew nearer, Jacob executed a courtier bow – his right leg extended in front, his left leg slightly bent, he leaned forward at the waist. With his left arm behind his back, he swept the air with his right in an extravagant flourish. With his head down, Jacob watched the vandals’ feet moving toward him. When he finally raised his head, he merely smiled.

Forming a loose semicircle around him, the vandals threw out taunts. Their leader, Cobb, stepped in front of Jacob.

“What have we here?” The question held an undertone of laughter. “Looks like we have ourselves a pretty boy.”

“Not pretty, a scholar,” Jacob said.

“All’s the same,” Cobb said. He reached out and flipped the collar of Jacob’s overcoat. “Whattya gonna do, read to me?”

“I will give you one chance to leave, and no harm will befall you, only one warning,” Jacob said.

“Or, what? You’re gonna take away our library cards?” Cobb laughed, coaxing his crew to join in his joke.

“This Repository is a sanctuary, a haven for generations of warriors, they are not happy about your trespassing,” Jacob said, looking at something over the intruders’ shoulders.

“What? You got yourself an army in here,” Cobb laughed again, only to stop abruptly, rubbing his hand down the nape of his neck. A sudden wave of cold air rushed through the gallery.

“Who’re they supposed to be?” Cobb wasn’t laughing. He fidgeted with growing anxiety. His crew closed ranks, a tingle of fear moving along their arms.

“You don’t read much, do you?” Jacob said, then called out in a voice too loud for a library. “They are yours.”

Cobb and his crew turned. A horde of men, dressed in battle gear dating to every era of war in world history, filled the gallery. At the head of the army were ten generals of great military power and prowess.

Taking hold of the book cart handle, Jacob turned away from the pending slaughter. leaving the generals to deal with the intruders. He had books to re-shelve.