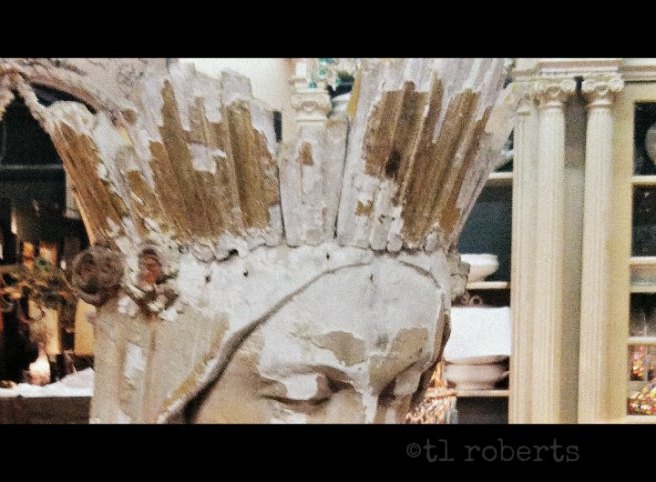 A possible sequel to this story…

“Ooo… you’re the beneficiary of a vast fortune.” Colin held up a letter, waving it with a grand flourish.

“Nigerian?” Gatta kept filling in the Saturday crossword in the Times.

“No, Hurin,” he said, folding the paper and making as if to tear it in half.

“What?” She tossed the newspaper and grabbed the letter before he could destroy it.

Gatta and Colin sat in an ornate office, the dark wood paneling and heavy tapestry curtains only added to the mystery of Gatta’s letter.

Gatta had heard about Hurin all her life. The ancestral home of her female progenitors, there was only a hint of possible royal connections. At the turn of the century, the Hurin monarchy ended in a bloody coup, with the ruling family fleeing the country, and living in self-imposed exile.

Saving the inheritance letter from Colin, she contacted the emissary named in the masthead. That lead to several more letters, attorney retainers, telephone calls and eventually an invitation to the consulate.

Until this meeting, all correspondence had been cordial, welcoming. Roger Coe, the diplomatic sitting across from them now, was anything but civil. He was cold to the point of hostility.

He questioned both Gatta and Colin at length about their intentions regarding the royal ascendancy.

“I had no intentions,” Gatta said, her voice edgy and lowered to an angry register. “I didn’t know the monarchy had been reinstated, or that I had sovereignty.”

The ambassador recoiled at her insolence.

“We have had many charlatans claiming to be direct descendants of the royal family,” he said, glaring at his guests. “You must understand our skepticism.”

“No, I don’t have to understand.” Gatta got up to leave. “I never made any claims, your agents contacted me, now you’re aggressively antagonistic. If this is the example of Hurin hospitality, perhaps some other scion is better suited to the throne.”

Colin saw the corners of the Coe’s lips twitch, then purse ever so slightly with amusement. Staying Gatta with a hand on her arm, Colin focused his own smile on their agitator.

“She doesn’t mean that,” Colin said.

“You’re next in line for ascension,” Colin accused the emissary. “If Gatta abdicates the crown, you’d be king.”

“She knows nothing of Hurin, nothing of proper protocols,” Coe said. “She is a vulgar commoner. I have prepared for the role of monarch my entire life. She will not usurp my reign.”

Gatta reached into her jacket pocket, the string of beads cool in her hand. A family heirloom, they once belonged to a great-grandmother many times over. Her family ancestry reached back beyond written record, their history passed through oral tradition.

“You know, Colin, you’re right,” she said. “I come from a long line of strong, resilient women. I need to continue that legacy.”

She pulled out the beads, and draped them around her neck. Coe’s eyes widen in recognition and shock.

“I think at my coronation, I’ll take back my birth name. The name every eldest daughter has had time immortal. A Queen shouldn’t have a nickname. Agatha is so much more regal.”