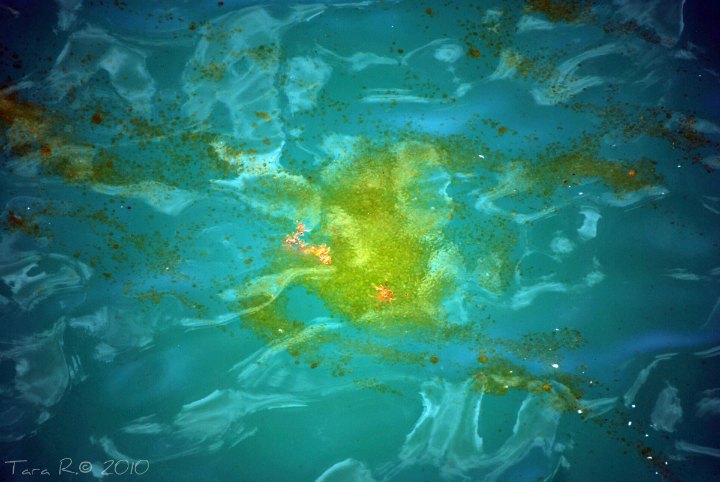 I tried telling people that the bruises were from my clumsiness, or that I merely bruised easily. No one believed me. The tiny, evenly spaced, purple ovals, the exact shape of an angry fingertip, erupted on my arms regularly, often with the previous alien markers not completely faded alongside the newer ones. As a child, teachers fretted over me, wondering if they should report my parents for abuse. Yet, no social worker came to my home demanding to see my stained flesh. As an adult, I kept apart from other people, avoiding personal contact in an effort to avoid unconvincing excuses. The truth, that the bruises were self-inflicted, was more difficult to explain. If each plum dot was inspected, a minute pin prick would be observed. The dots were evidence of an invasive needle prick, where an infinitesimal portion of my blood was drawn. Replacing my vital fluid with a serum of otherworldly origin, resulted in the telltale marks on my skin. The insidious violence, seeping under the dermis, spread out like a malignant disease. This covert phlebotomy began beyond my earliest memories. Representatives, none of whom ever gave me their names, came to me each fortnight, black leather satchel filled with corked, glass vials and archaic hypodermic needles containing a fluorescent yellow liquid. My parents tried to be as nonchalant about the visitations as they could, hoping to keep me placated and unresistant. When I reached my majority, I was instructed in how to make the transfer myself. I would simply find the yellow vials carefully deposited in my apartment refrigerator, having mysteriously arrived while I was out. I replaced these vials with ones of my blood, which were as mysteriously removed from my home. The last vial was waiting for my ministrations. Once the final transfer of fluids was made, I would be eligible to return to the home world. I sat staring at the glowing liquid, syringe in hand. An equal amount of blood had already been drawn. There would be no more deliveries. It was a given that I would complete the transformation. Still… What if I discarded the last dose, and waited? My human blood would be restored in about four months. Could I go undetected that long? Would the others hunt for me? I thought about all the concerned questions regarding my bruises, about the anonymous pamphlets left under my door offering to help me escape to a battered woman’s shelter. Rummaging through old mail, I found the brochures. Maybe I could lose myself in one of these programs, eventually becoming useless to the others, reverting to fully human again. Looking around my apartment, I realized I was willing to leave everything behind, and start over somewhere else. I reached for the phone, asking the woman who answered if she could help me find a new life. Pulling the plunger from the unused syringe, I poured its contents down the sink drain. When the knock came at my door announcing my rescuer had arrived to take me away, I worried that I made the wrong choice.