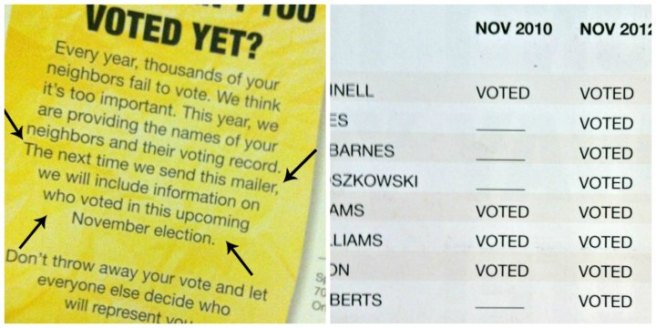 Yesterday I got a “shaming” letter in the mail.

Typically, I toss any and all mailers in the recycling. Most of them are junk – advertising goods and services I’m don’t care about. This one, pointed out to me by my son, was from Citizens for a Better Florida, an Orlando-based PAC that calls itself an Electioneering Communications Organization.

It appears to be a “get out the vote” campaign. In and of itself, not a bad thing. What bothered me about this one, was that it listed eight residents on my street, by name and address, and indicated whether they had voted in the 2010 and 2012 elections.

There was a warning that after the Nov. 4 vote, another mailer would be sent with a list of neighbors who voted – or didn’t, by omission from the list.

While who we voted for is privileged, whether we voted or not apparently is public record.

Yes, a member of my family was shown not to have voted in 2010. Of course he was only 17 at the time, but that bit of information wasn’t included.

Everything about my voting record should be private. It should be my right, and my right alone, whether to divulge who I voted for, or didn’t vote for, in any specific election.

What did this PAC expect me to do with this information? Do I now go door to door and demand my neighbors vote next Tuesday? Do I worry about vandals since a member of my family did not vote illegally in 2010?

I actually look forward to elections. I take my civic duty seriously. I do my due diligence and research the candidates. This mailer has taken some of the fun out of it for me. I don’t do well with intimidation. Tell me I have to do something, and you’ll likely get the opposite response.

If I were to listen to my Curmudgeon Spirit Animal, I’d take this mailer, tear it up on the lawn of my nearest voting precinct, and NOT vote on Tuesday.

When did shaming become the national motivator for everything?