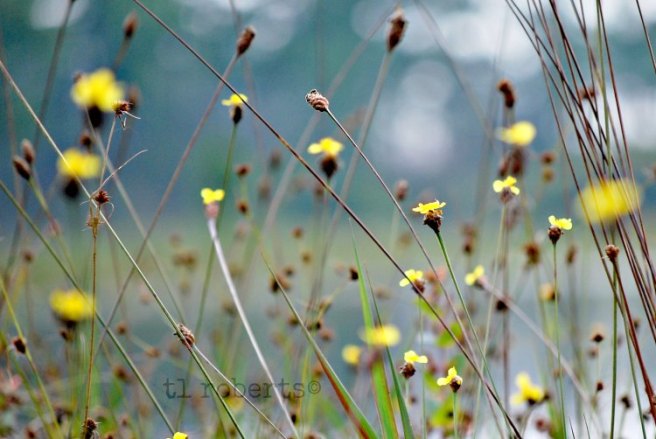 The good news was that I woke up face up, the bad news was I was alone in a marsh of yellow wildflowers in the middle of nowhere. After wondering where I was and why I was there, I thought that under normal circumstances the tiny daisies were sort of pretty, in a random, out-of-focus sort of way.

While trying to sit up, I also became aware that I was naked and that my head throbbed like one hellacious hangover or from a bar fight bludgeoning, either way I simply settled back down into the muck.

I was grateful it wasn’t raining, and that it was a warm fall morning. Any other time, being out in nature would be fun. I would be bird watching to hunting for butterflies. The buzzing in my ears wasn’t cicadas, or birdsong. It was an incessant ringing that no amount of yawning stopped.

Listening for any familiar sounds above the ringing, I tried to ignore the buzzing so I could pinpoint any road noises or maybe an airplane, voices of hikers, anything that told me where I was.

For the time being, I just wanted to sink into the warm mud and sleep off my throbbing migraine.

I must have fallen asleep because the next thing I remembered were dogs baying, lot of dogs and urgent voices calling for assistance, then I was surrounded by the pack. The voices became more insistent. People kept yelling, “we found her,” and shouting out orders for a life-flight helicopter.

Someone was thoughtful enough to throw a blanket over me, but covered my face too. I was just glad for the sensitivity.

When the dogs went quiet, I got a little worried, but soon I could tell people were kneeling next to me. I heard a zipper then several hands lifted me out of the mud and laid me on a stiff board. Then the zipper again, and everything went black.

I was disappointed. I had never flown in a helicopter before, and if I couldn’t see, the whole ride would be spoiled, and I couldn’t seem to move my hands to uncover my face.

No one spoke on the flight over. The EMTs should have at least discussed my condition, what sort of medical issues I was facing and all that, but nothing. That’s when I really began to worry.

I came to in a dimly lit room. From watching too many crime and medical TV shows, I guessed I was in either an operating room or a morgue. I was lying on a metal table with a sheet drawn up over my body. At least this time, my face was not covered. There were other people in the room, but they were whispering and I couldn’t make out what they were saying.

While I waited, I tried to think about had happened. It was all a blur. I had no memories of what I did, or where I went after waking up yesterday. If it was only yesterday

A commotion at one end of the room, caught my attention and I heard a new voice. The words were muffled but I could tell whoever was there was bouncing from anger to fear, to excited back to anger.

I didn’t recognize any of the voices at first, their words were confusing and coming in such a frantic rush. I finally singled one out, a hint of awareness niggling at the back of my brain. Then I heard a person was running toward the table where I was lying.

Then he was there. He draped himself across my cold, sill body, shedding bogus tears and wailing with feigned anguished.The others gave him what privacy they could, standing away from us. I saw his face and the trace of heartless glee he hid from the others. He actually smiled and winked at me.

One thought on “Wildflowers”