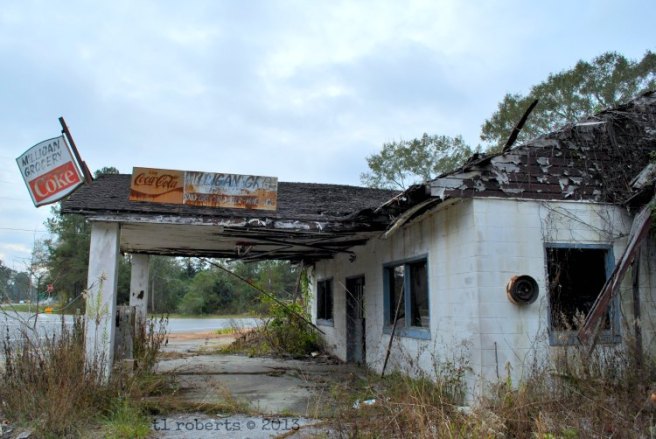 The day was grey and lifeless. Few other cars or trucks shared the road with Bobby. His usual route took him through small towns and farming communities, down abandoned rural highways that paralleled the new Interstate. Once popular truck stops, decaying diners and gas stations were now repurposed thrift stores and church-bazaar home decor outlets.

Bobby hated driving on the interstate and having to fight for his 100 feet of road. Little sports cars staggering through traffic like drunk frat boys; motorcycles buzzing past like a tin can mosquitoes. Even his fellow truckers were jackholes.

It wasn’t like the good ol’ days when OTR drivers looked out for each other. Rarely did Bobby’s CB radio crackle with friendly chatter.

Unlike other long-distance truckers who often succumbed to the ennui and despair of their lonely existence, Bobby welcomed the quiet, he liked the solitude. He had few friends and even less family. No ties, no obligations, he didn’t even own a dog.

His grungy, Kenworth ball cap sat upside down on the seat beside him, his well-worn leather work gloves tossed inside the crown. Bobby flipped on the cab’s heater, adjusting the vents so the hot air wasn’t blowing on his face.

A Coleman thermos was held firmly between his thighs. The cup tucked into the drink holder in the center console was half full of steaming coffee. The last leg of this haul was a long one, and Bobby needed the jolt of caffeine to stay awake.

With deft, one-handed skill, Bobby replaced the cap, and a single twist tightened the seal. Keeping his eyes on the road, he added the thermos to the pile with his cap and gloves.

He was coming up on his turn. The new traffic light at the intersection of state road 81 and highway 4, where Milton Market once stood, was not a welcome sight. Locals petitioned for the signal – they said it was because of an increase in collisions at the junction. Bobby now just geared down, check for oncoming cars, and oozed through the red light.

There was a time when the Market at the intersection was a usual stop. Bobby would take hauls just to make a run through town.

When the interstate came, cutting off the town and 100 miles of distance between major cities, the Market couldn’t keep its business. When it closed, Jaime left with it.

Jaime was the only thing, the only person, who could make Bobby want to give up the road, and she was gone. He had looked for her, but as time went on and more stores closed, he kept missing her – always a day behind.

The hum of his engine grew deeper, the rig shuddering as he stood on the brakes. The way was clear, and he took the turn in a spray of gravel and dirt without so much as a glance toward the relic sitting alone on the side of the road.

A woman, dressed in a tattered waitress uniform, her name tag reading, “Jaime,” stood outside the Market. Insubstantial as smoke, she waved at the trucker as he drove past, whispering, “please stop. Take me with you.”