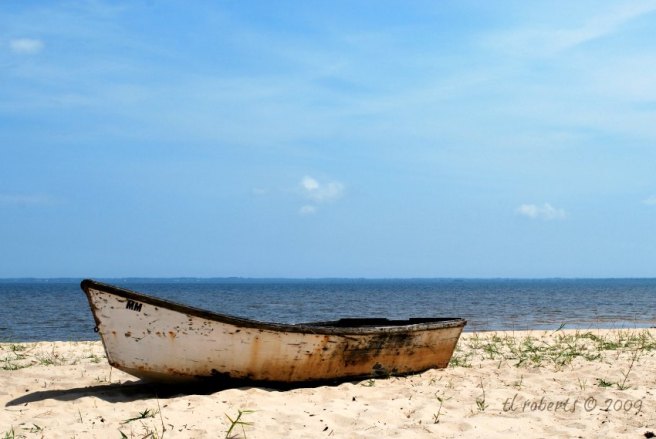 I can’t be sure what woke me, the seagulls or the sun bearing down on my pastry white skin. I could almost smell it charring under the relentless heat.

Opening one eye, I could only see a few billowy clouds in a brilliant azure sky. It hurt to turn my head, but I could feel rough wood when I reached out my arms. Even that small movement sent a shock of pain through my body.

I rubbed my tongue over furry teeth, spitting out grit and last night’s debauchery. I could only remember flashes from the evening, but what I couldn’t remember was how did I get into this boat.

And where was this boat marooned.

I grabbed the edge of the boat, struggling to pull myself up so I could see where I was.

All I could see was a deserted, weathered beach. I was on a white sand shore, empty of any other person. A gull screeched above me, hovering just out of reach. Pipers skittered across the tide line, digging for ghost clams.

The thought of seafood made me gag.

I swatted at the diving birds with a dexterity I never thought I possessed, and definitely not in the condition I found myself. The momentum of the swing took me over the side of my boat, landing me face first into the sand. This grit tasted marginally better than the flotsam I woke up tasting.

Crawling to the bow of the boat, I sought the only shade I could find. Out of the blazing sun, I still had little relief. The heat was stifling. Squinting against the glare of the sun refracted in the emerald water, I scanned the horizon. It was eerily vacant.

As a child, summer vacations at the shore meant watching the fishing boats trawling for shrimp. On even given day, there would be a fleet of half a dozen trawlers casting their nets. The horizon stretching out before me was barren, not even a cloud touched the curve of the sky.

When I leaned against the rough wood, flakes of chalky paint fell like rain on my shoulders. I pressed my fists against my temples, trying to sort out my predicament. I had no notion where I was or how I got there. A wave of nausea washed over me.

“So far, her reactions are as postulated,” one of the lab coat men said. “You’ve arrived just in time, we were about to begin adding new stimuli.”

“We are sending in storm clouds,” the other scientist said. “The boat is her only visible shelter.”

“Other than her physiological response, we will assess how she utilizes her resources to find refuge,” the first man said.

“Will she remain where she is, will she get back in the boat, or will she turn the boat over to shield herself from the rain.” the second man said.

Out on the beach, I was so close to remembering something, something I knew was important, I didn’t notice tempest rolling in until the first, fat raindrop fell.