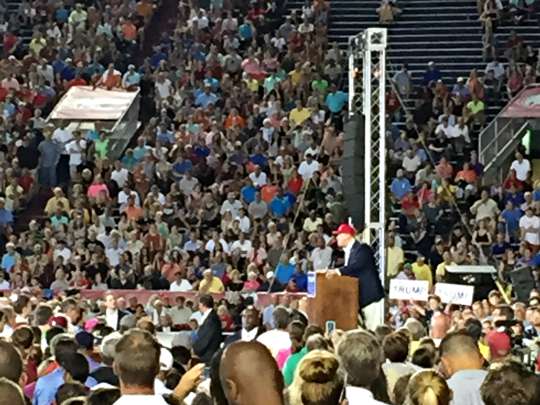 Friday night I went to a political rally, and didn’t even get a T-shirt.

I traveled almost two hours, one-way, to attend a rally for presidential hopeful Donald Trump. All of my friends, to a person – saving the friend I went with to the event – questioned my sanity.

If I am anything, I am pragmatic. The purpose of this trip was to get a first-hand impression of a man who is making a serious run for the job of World Leader. To do that, I needed to hear his message for myself.

I don’t believe half of what I hear, and even less of what I read or get second-hand. I’ve learned that anyone can be made to sound like a genius or a madman, when the truth is somewhere in-between. Still, I am no closer to being a Trump supporter than I was before.

I liken this trip to my singular trips to Biloxi casinos, and a three-day music festival earlier this summer in Gulf Shores. I’ve never been to a political rally, but now I can say I have, and I don’t ever have to do it again.

Reports estimate the crowd was close to 30,000. I think that is accurate. Granted, the crowd was cordoned off to maximize how full the stadium would appear on camera, but the stands were packed with people of all socio-economic states, babies to the elderly, all races, all genders, fans and foes. Some were dressed in red, white and blue. Some carried signs, and shook patriotic pompoms. There was dancing and singing. It was a rock concert atmosphere. All it lacked was an inflated beach ball batted around in the mosh pit.

When I first considered going to this rally, and about the person it was supporting, I simply couldn’t pass up the opportunity. The only things I think I know about Donald Trump are what the media has spoon fed me. I get soundbites and truncated quotes.

On our drive home from the event, my friend and I listened to radio coverage of the rally. It was as if the pundits were reporting on a different event than the one we just attended.

Yes, Trump is over the top. Yes, he is unashamedly impressed with himself, and yes, he is so NOT politically correct. It is those things that resonated with the people sitting around us in that football stadium in a poor neighborhood in Mobile, AL. There were constant shouts of agreement, and boos on cue when Trump mentioned hot topics like “anchor babies” and Hillary Clinton.

He says what many of them think, but who are more restrained about saying it out loud. He doesn’t care what you think of his candor. He believes in what he expounds, and is in a “take no prisoners” position. He claims that his campaign is not taking any donations from lobbyists, and that he owes no one any political favors.

From where I sat, it wasn’t so much that Trump put forth outlandish proposals, it’s that his level of confidence and bravado was not a normal Washington persona. He doesn’t have a “politically correct” bone in his body.  His elementary school record must have had a frowny face sticker with a note – “doesn’t play well with others.”

During his speech, Trump talked about immigration, supporting our military, negotiating with foreign leaders, the economy, Nabisco and Ford, Jeb Bush, Caroline Kennedy, and his plans to “Make America Great Again!” He spoke of foreign leaders in terms of business associates and not people to tiptoe around, and of industry CEOs like subordinates to subjugate.

He talked for more than an hour, in what often sounded like extemporaneous rambling, telling anecdotes, dropping names, and bragging/not bragging.

The other Republican candidates have to step up their game. They have to answer to their constituents’ demands for serious changes in how our government does its job, changes that Trump promises he can achieve. Even if he isn’t named the party nominee, I can already see him being an incontrovertible squeaky wheel in the Washington machinery.

After hearing Trump speak, I can understand the appeal of his message even if I can’t endorse it. I’m glad I went to the rally. What I learned will make my vote a little easier come next November.