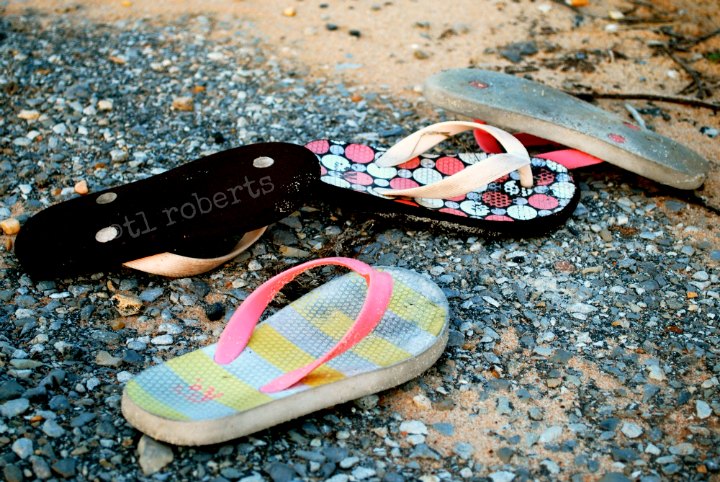 If I wasn’t already dead, I’d die of embarrassment.

A flip flop was the cause of my demise. Not mine, of course. I wouldn’t be caught dead in such low-class footwear.

Oh, I see. That’s right, I am dead. I keep forgetting.

It was such a silly thing really. My friends were forever telling me I need to pay more attention to my surroundings. Leslie actually threatened to have “situational awareness” tattooed on my forehead. I never understood that. I can’t see it if it’s on my forehead. How was that supposed to help. Leslie can be so obscure sometimes. Or is the word, “obtuse?”

I guess it doesn’t matter now.

Our annual Girls Weekend was supposed to be a relaxing. A few days at the beach to just unwind. Am I the only one who grew up? Leslie and Peggy were out of control. It was all I could do to keep them from making fools of themselves.

We’re not young women any longer. Some of those boys they were flirting with were not much older than our sons. Shameful. The way they were dressed? I wouldn’t let my Tiffany out of the house in those outfits.

My attire was both tasteful and age appropriate. The fact that my buttons came unstitched wasn’t my fault. I certainly did not intentionally expose my bosoms.

The rumor is that I was drunk. I wasn’t drunk. I may have been ever so tipsy, but definitely not drunk. That would be unladylike. I was in complete control of my faculties. It was those wretched flip flops that were responsible, not an inability to hold my liquor.

There is also a rumor that I was dancing on the chairs along the balcony. That’s wrong. There was no dancing. I was merely trying to get a better look at the lovely wind chimes hanging from the floor above.

Poor quality furniture was to blame for the fall, not me. That and those detestable shoes. If not for them, I would have righted myself and landed on the balcony floor, and not tumbled over the railing and onto the pool deck.

If the truth be told, the flip flops were probably Leslie’s.

13 thoughts on “Blown out flip flop”