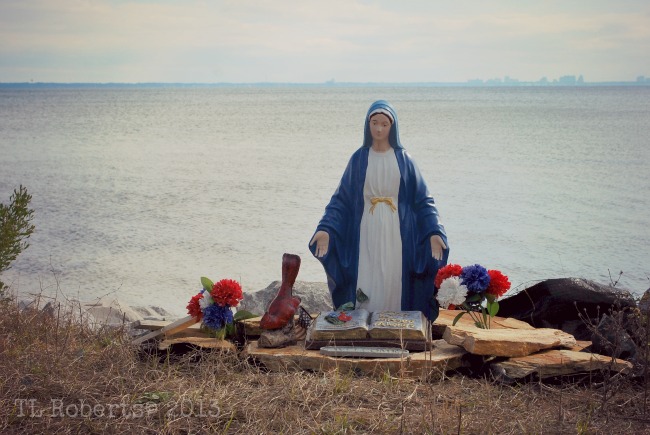 Stanley wasn’t sure which was more nerve-wracking, facing the Family Boss Paul, or his second Butch. Paul was intense, loud and over-the-top, but you knew exactly where you stood with him. Butch was different. He had a quiet way about him, almost too calm, like a volcano just before it blows.

The newest recruit, Stanley knew Paul was testing him and hoped he’d measure up. Any other job you’re on a 90-day probation. If you screwed up, all you were out was a job. Here, you fall short and it could mean your life.

That morning Paul handed him his first contract. Stanley expected it would be tricky, he didn’t expect it would be a woman.

Butch was sitting at a massive desk, gift-wrapping a small book when Stanley was let in the office.

“I’m all thumbs here,” Butch threw up his hands in defeat. “Here, you do this.”

Stanley edged up to the front of the desk, taking the shabbily wrapped book. Smoothing out the wrinkled paper, he started the process over, taking his time to crease the folds, and using the minimal amount of tape.

“‘Snow White?’ I didn’t peg you for a Disney princess fan,” Stanley said, handing the finished gift back to Butch.

“It’s for Paul’s daughter, Paulette, she’s turning 10 today” Butch moved aside the book, gesturing for the younger man to sit. “You know the story, right?”

At first Stanley thought Butch was teasing him about his age. Barely 20, he was the youngest member of Paul’s crew and he had a lot to prove.

“Yeah, I know it,” Stanley tried to keep his voice level.

“It intrigues me,” Butch said. “It’s not so different from our family. The queen is jealous of her young, and beautiful step-daughter, and sends her huntsman out to kill the girl. But, the huntsman can’t do it, and instead only takes her out into the woods, tells her to run away.”

Stanley frowned, trying to keep up with Butch’s analogy.

“I can see that I’ve confused you,” Butch leaned back in his chair, his crossed feet resting on the corner of his desk. “I know about your contract, and we need to discuss that.”

Stanley sat up straighter, rubbing his hands nervously over his thighs.

“What do you know about your mark?” Butch looked away from Stanley, steepling his fingers under his chin.

Listing the specifics of his contract, Stanley ticked off his intended victim’s gender, age, general description, and daily routine.

“I know that her identity is not included in your orders,” Butch turned only his eyes toward Stanley. “But, you need to know. Her name is Gail Giambi, Paulette’s mother.”

The news hit Stanley like a gut punch. “The hit is the Boss’ own wife?”

“You’re supposed to make it look like she just left town, right? No body, no traces of violence, right?”

Standing up, Stanley stepped behind his chair, gripping the back to steady his shaking.

“Gail… Mrs. Giambi is not to be killed, you understand?” Butch said. “You’re the huntsman and she’s Snow White. You are only to take her out of town. You’ll help set her up under an assumed name, and leave her unharmed. She’s never to be told she was a target. Do you understand?”

“I’m supposed to bring back proof of death,” he said. “You’re asking me to sign my own death warrant.”

“I’ll provide you with proof, but this stays between just you and me,” Butch took his feet down and walked around to the front of his desk, sitting on the edge. “Gail is not to be harmed. Paul wants everyone to believe she’s abandoning him and Paulette, but this hit, your introduction into the family, is his way of disposing of a problem. No one else would have done it, knowing who the target was. You’re new, you don’t know her.”

Stanley saw he had no choice. He would be Snow White’s rescuer.

“The less you know about the ‘whys’ the better for you,” Butch said, stopping short of more explanation. “All you need to know now, is that when the time comes, and it will come, I won’t forget this, and you’ll be rewarded for your loyalty to me, to Gail.”

Carrying Pauley to the waiting plane, Stanley’s first memory of her and Gail came flooding back.

Initially, he thought Butch was playing him. Instead, Stanley quickly learned that Butch was the real brains of the organization, that Paul was the boss in name only.

Butch was good to his word, helping Stanley cover for his rookie hit. Paul believed Gail was dead, and without a body, he could continue his ruse of telling anyone and everyone who would listen that she simply left town, abandoning him and their young daughter. When Paul died and Butch took over as the new Boss, he kept his promise and made Stanley his second.

Walking across the tarmac, Stanley looked down at the sleeping Pauley in his arms, seeing her not as that 10-year-old girl, but as the young woman she had become. Over the years, he had treated her more like a little sister, but now, it felt different, she was different.

Stumbling over a crack in the runway, Stanley held Pauley tighter, not wanting to drop her. The jarring woke the drugged woman, and Pauley briefly opened her eyes.

“Hey babe,” Pauley slurred her words, and blew him a kiss. Stanley wasn’t sure he heard her right. Pauley closed her eyes, and snuggled in closer, flinging her free arm around his neck.

Settling her in one of the prepared plane seats, Stanley unwound Pauley’s arms from where she was holding him, and covered her with a light blanket. On impulse, he leaned in and kissed her forehead, feeling a warm sensation wash over him when she smiled at his touch.

Months later when she called asking for help to get back to the U.S. from Morocco, he hoped that part of her reason for wanting to come home was to see him again.

*Lance and I both agree that somewhere in previous chapters of either Dead Money or our current “Brazilian Job,” I mentioned Pauley’s last name. Yet, even reading through everything, I couldn’t find it, so I just gave her a new one… so much for continuity.

My chapter this week involves some backstory on our characters. Stanley is becoming a more important player and I wanted to give a bit of his history with Pauley prior to “Brazilian Job.”  Stan also had an encounter with Vivian (aka Millicent) in her former life in “Dead Money.” Their past plays a part in his relationships with the two women now. Check out Lance’s new chapter, “Titled Sweet Dreams,” at My Blog Can Beat Up Your Blog.

We’ll be back to our regular schedule next week.

3 thoughts on “The new kid”