More from the Dinner Party…

Inspiration posters decorated two walls of the visitors’ room – taped to the cinder block, not nailed.

Small tables and stackable chairs were littered around the room, making it look like a crowd had made a hasty exit. The door leading inside, and the two walls facing out into the common space were glass so staff could keep anyone in the room under observation.

“Why?” Mr. Stiles held up a yellow crayon.

“We can’t have pencils here in the West Ward,” Hallie said, working on a rendition of a blooming sunflower.

“If someone got a little wild, the worst they could do with a crayon was poke someone hard enough to bruise, most likely it would break first,” Hallie explained. “They can have pencils on East Ward, the people there aren’t as rowdy.”

“Aside from arts and crafts, what do you do to pass the time?” Mr. Stiles sorted out an evergreen crayon.

“There’s badminton on the lawn,” Hallie added tuffs of grass around the base of the sunflower’s stem.

“Couldn’t that devolve into something perilous?”

“Not likely,” Hallie held up her drawing, admiring her handiwork. “The rackets are foam and the shuttlecocks are plastic. The worst that could happen is some slap fights. This isn’t the 2012 Olympics.”

Mr. Stiles smirked at Hallie’s London badminton scandal reference, one he was certain the staff at the Beacon Point Mental Institution wouldn’t appreciate.

“Why are we here, Miss Meyer?” When Hallie finished with her drawing, Mr. Stiles returned the assortment of colors to their paper cup. “Why are you here?”

“Miss Meyer, your wish, or the granting of it, would not land you in a psychiatric facility,” Mr. Stiles said.

“Do you even remember what I asked for?” she said.

“I remember all my guests’ wishes,” he said, pulling her wish card from his jacket pocket. “I have your request right here.”

“I was tormented in my teens, the victim of the worst bully in high school, Ralf Sauer. My wish is to track him down and confront him. Tell him what a living hell he made my life, and make him feel that same helplessness.”

“And, so here we are,” Hallie said, sweeping her arms out wide to take in the whole of the visitors’ room and garner attention from the Ward nurse. “I got my wish and then some.”

“You confessed to harming your high school bully?“ Mr. Stiles studied Hallie’s drawing so he didn’t have to look directly at her.

“I confessed to killing him,” she said.

“The details are fuzzy,” she admitted. “But, I wanted Ralf dead, I knew how I wanted to kill him, and he ended up dead, in the same manner, I planned.”

“Do you actually remember doing something that resulted in his death?” Mr. Stiles focused all his attention on the young woman across the table from him. His hands, palms together, pointed at her with the wedge his fingers made. “This is very important.”

Hallie kicked back in her chair, arms crossed defensively over her chest, her head cocked to one side. Bitting on her lip, she considered her answer carefully.

“No, Mr. Stiles, I do not remember the actual deed,” she said. “I remember going to see him and talking to him, or more accurately, yelling at him. The next thing I remember is waking up on the floor and him, a few feet away, lying in a pool of blood, a knife sticking out of his chest.”

“Did you bring a knife with your?” Mr. Stiles said. “Were your fingerprints on the murder weapon?

“I did not have a knife with me, I chickened out on that,” she said. “I’ve been told there were no prints on the knife that killed Ralf.”

“Your attorney wasn’t able to get you released on bond? This is all still circumstantial evidence,” Mr. Stiles said.

“I can’t afford a private lawyer, I was appointed a public defender,” she said. “He told me that with my confession, a commitment was the only option other than being locked up in the county jail. I thought my chances were a little better here.”

“You will not be staying here one night longer,” Mr. Stiles said. “You will be a guess at my estate. I have an attorney on retainer. He will straighten out this quagmire.”

Later that evening, while Hallie Meyers slept in one of the well-appointed guest rooms at Mr. Stiles’ estate, the master of the manor and his concierge, Jasper, were deep in discussion.

“How did this go so side-ways?” A chink in Mr. Stiles’ normally unflappable demeanor was widening, showing a vulnerable side of the man that worried Jasper. “In all the years that I’ve been granting wishes, never has one of them gone so horribly wrong. There are protocols. Miss Meyer’s bully was, first and foremost, not intended to die. And secondly, whatever was to befall Ralf Sauer, was not to be traced back to Miss Meyers.”

“There are precedents for wish targets to come to unique ends,” Jasper said. “Miss Bentley and Miss Brown most notably.”

“In those incidences, if you will recall, certain circumstances warranted specific outcomes,” Mr. Stiles said. “Also regarding those wishes, the grantees had no involvement in the execution of the fulfillment of said wishes.”

Jasper was working on a laptop computer, digging into public arrest records, and some not so public information files. He and Mr. Stiles had been conducting their own investigation since securing Miss Meyer’s release and bringing her back to the estate.

“Other than her proximity to the deceased at the time of his death, there is nothing that links her to the crime. No fingerprints, no witness accounts of them together recently, no correspondence – written or electronic. The physician reports concerning Miss Meyer’s injuries support her assertion that she was unconscious prior to whatever happened to her wish target.”

Mr. Stiles paced around the kitchen island. Flustered by the turn of events, he was having trouble concentrating.

“Think, Jasper,” he said, pounding the counter with his fist. “Who else would have profited from either the death of Mr. Sauer or implicating Miss Meyers in his murder?”

Hunched over, studying the computer screen intently, his chin resting in one hand, as the other typed out various commands, Jasper seemed lost in his task. Mr. Stiles continued to pace.

A clocked chimed six in the foyer. Like a wake-up alarm jarring him out of a sound sleep, Jasper suddenly bolted upright.

“Of course,” he shouted.

“You’ve found something?” Mr. Stiles stood behind him, scanning the computer screen from over Jasper’s shoulder.

“I finally remembered something,” Jasper searched for a specific name.

Mr.Stiles sat down heavily on the stool beside Jasper.

“We have a battle ahead of us,” Mr. Stiles said.

“What are you guys up to?” Hallie came into the kitchen, rubbing the sleep out of her eyes.

“Speak of the devil,” Mr. Stiles said, pulling another stool out for his guest. “Would you care for a hot cup of coffee, Miss Meyers?” 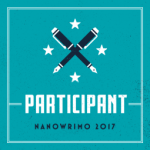 One thought on “Game, match”