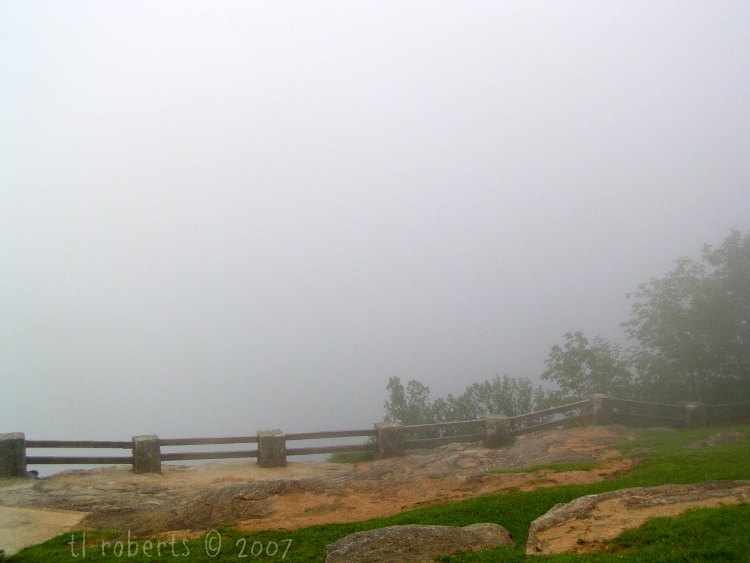 The snow this close to the edge should be hip deep, instead, the temperatures were almost Spring-like. The expedition team wore only light trekking gear. If Col. Jerrod had not made the command order, team seismologist Pater Robie would be in flip-flops and not his required arctic boots.

“I can hear rushing water.” Daisy Kendall, the team Arctic Ecologist, was keying information into her electric notepad, shaking her head in disbelief.

“Six months ago the ice barrier at this point here was nearly 75 feet high,” Daisy looked up to where the barrier should rise. Instead of a solid wall of ice, a blanket of fog was all anyone could see beyond the forbidden frontier.

“The scope of the thaw is worse than I anticipated,” Daisy said, moving closer to the fog bank. “If there is enough melt to create moving water, the remaining wall is weakening to the point of certain collapse. Flooding will be catastrophic.”

“At this pace, the barrier could fail in less than a month,” Jerrod said.

“Wait,” Pater said, joining Jerrod and Daisy. “You’re saying the ice barrier has already receded to a perilous degree. There’s already enough melt to create rivers, right? Where has all that water gone? There is no flooding, no seismic activity.”

Daisy stowed her tablet in her pack, giving herself time to control her anger.

“Pater,” she drew out his name like an elementary school teacher talking to a kindergartener. “The thaw, to this point, has a been relatively gradual. Any melt spilled back into the aether, but it is accelerating to the point where the runoff has to go in several directions, not just over the outer edge.

“This means more stress is put on the ice barrier, like when you have to twist a plastic ice tray to dislodge the cubes. The barrier is cracking, and will soon fracture. Chunks of it will fall into the melt rivers… hence, flooding and seismic activity.”

She enunciated the syllables of her last two words in a staccato rhythm.

“I still don’t understand why the flooding wouldn’t just follow its present course, over the aether,” Pater slouched against one of the frontier fence posts. “If ‘certain collapse’ is coming, why hasn’t the government evacuated people in the likely disaster zone?”

Daisy dismissed Pater with a flick of her hand, “You talk to him, colonel.”

“I don’t know where or how you earned your degree,” Jerrod began. “but, you’re the densest scientist I’ve ever met.”

“I’m dense?” Pater laughed. “You two flat-earthers are thicker than that fog. There was no ice barrier here, there is no wall surrounding a disk-shaped Earth. We live on a sphere, a round planet.”

Daisy grabbed at Jerrod, a look of shock and horror on her face.

“You, shut your damn mouth!” Jerrod tried to charge Pater, his fist raised like a cudgel. Daisy held him back, clinging to one arm.

Jerrod was interrupted by a deafening thunderclap as shards of ice rained down. A sound like a thousand freight trains rushed toward them, an icy tsunami of slush and water. They tried to run, but the earth violently shook them to the ground.

As he was losing consciousness, his lungs filling with icy water, as the world was coming to an end, Pater’s last thought was to wonder how he could have been so wrong.

One thought on “Beyond the wall”