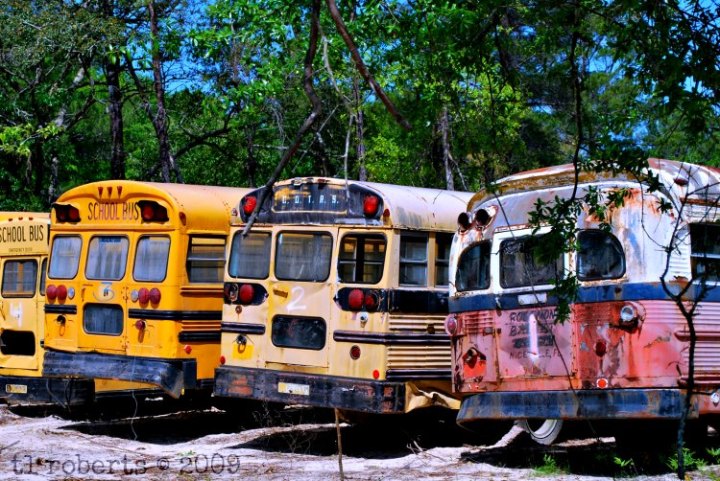 It was the smell that Vince would remember. That warm milk, piss and vomit mélange that always made him think of elementary school. Mix in the lingering pall of old, grimy oil, and the bitter tang of iron oxide on the back of his tongue, Vince felt like he was walking through a cloud of bad memories.

The equally grimy and greasy scrapper at the wrecking yard office pointed Vince to where the industrial hulks were stockpiled. Vince only wanted to find the retired Bluebirds but had to range over fields of rusty COE Macks, corroded Mercedes panel vans, and broken down John Deere Harvesters to find his quarry.

It was summer. Vince knew the choking dust and hungry horseflies would probably get him before the stifling heat and suffocating humidity did. Trudging around the broken down vehicles, Vince cursed himself for not bringing a water bottle.

When he located the faded and derelict yellow monsters, they were in the final field he searched, parked head-in along the wooded edge of the junkyard. They were packed in tight enough that he knew he couldn’t gain access through the side entry doors, he’d have to get in through the rear emergency gates.

He didn’t bring any tools with him, that would have been too conspicuous. Searching the ground around the relics, Vince found a piece of metal study enough to pry open the locks. As with finding the bus graveyard in the last place he looked, it took breaking into every bus to find the one he wanted.

The screeching hinges grated on Vince’s already frayed nerves. It was as if the bus was fighting against the intrusion, screaming for help when none was coming. That warm-milk-grimy-oil stench assaulted his senses when the door finally opened.

Vince made his way to the head of the bus. From the center aisle, looking over the seats, Vince counted, touching each seat back as he walked nearly the full length of the bus.

At seat 9, driver’s side, he knelt and began rummaging under the bench, hoping duct tape had the staying power urban legend gave it. After 15 years, expectations were low.

Fishing around among the spring steel, flakes of rust rained down, coating his hand in black residue. His fingers groped around the arced zigzags for the edges of what he hoped were strips of tape. Age, and heat, and neglect had fused the adhesive to the metal, Vince broke several fingernails trying to pull off the bindings.

With a final yank, Vince freed his hidden treasure. Sitting in the bus aisle, he examined his find – a small manila envelope, encased in weathered, silver duct tape. Tearing open the sealed flap, Vince shook the wrapper until a brass key fell out, surprisingly shiny for its age.

Turning the key over in his hand, Vince saw the numbers, “3866” engraved on the bow. He pulled up a bead chain hanging around his neck. Unsnapping the connector, he threaded the key onto the chain, then placed the key inside his shirt.

On his way out the junkyard, he waved goodbye to the yard manager.

“Didja find what you was looking for,” the man shouted, not moving from his camp chair sitting outside the office in the shade of a candleberry tree.

“Nope,” Vince said, avoiding eye contact. “Thanks for letting me hunt around.”

“Well, come back and see us again.”

Once in his truck, Vince thumbed in a number on his phone. Rubbing his chest he could feel the cold metal against his skin.

“I found it,” he said when the call connected, then ended the call without another word.