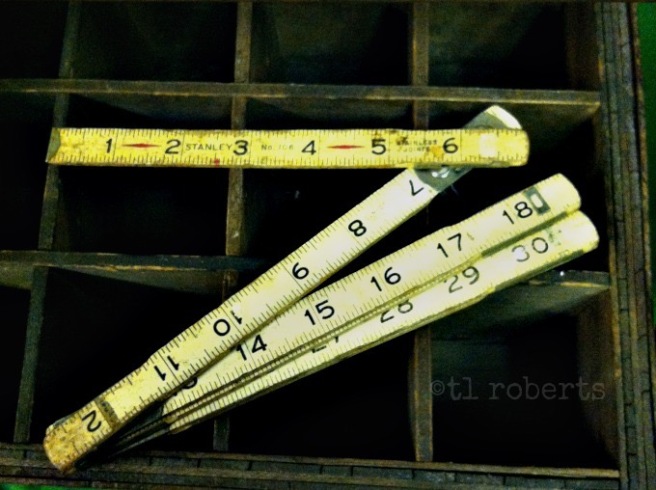 He pulled the ruler from a narrow, side pocket of his overalls, snapping it open with military precision.

Despite his workingman métier, his appearance was always meticulous. A razor-edged crease ran down the center of each pant leg; his white oxford shirt, starched and buttoned to the neck; and his nails free of grime, were trimmed and buffed to a high sheen. His coal-black hair, cut just above his ears, was slicked back, not a lock out of place.

At 3 o’clock in the afternoon, his only imperfection was a visible darkening on his prominent check bones, a heavy beard lurking beneath his clean-shaven skin.

With each click of the wooden measuring segments, he maintained eye contact with his client. The job was not complete, despite the rapidly approaching deadline. Humphrey’s procrastination was mainly due to his attention to detail.

“Measure thrice, cut once,” was his relentless protocol.

The client was at Humphrey’s workshop, concerned the project wouldn’t be completed in time.

“You’re cutting it pretty close,” the man said. Checking the large industrial clock on the far wall of the workshop, he was visibly agitated.

Humphrey harrumphed, waving his carpentry ruler like a sword.

“You wound me, sir!” He flourished his cherry and brass weapon once more, backing his client out of the workshop into the parking lot. “You will have your commission by the end of the day.”

Then he slammed the door.

Humphrey went back to work. There were only a few trifling details to attended to, but he didn’t appreciate being rushed, nor his expertise challenged. The job would be completed on time, and not one second sooner.

Laying the ruler along each edge of the coffin, he reassured himself of the perfection in its geometry.

“It’s not like it would kill him if it’s late.”