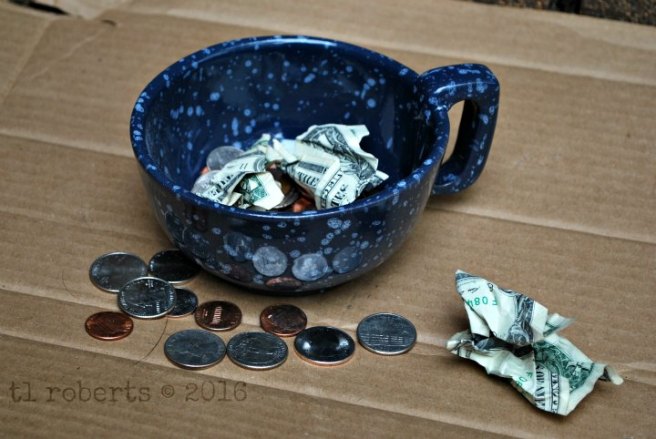 I knew what day it was by what instrument Carl was playing. A fixture at the corner of Summit and Division Streets every day except Sunday, Carl said he gives the Lord the Sabbath. He was as much a fixture at St. Bellamy’s Mission, having been a member there for all of his 76 years. I didn’t know his name at the time. I only knew that he made my day better when I saw him in his usual spot.

Mondays were the harmonica, Tuesdays spoons, on Wednesdays he played guitar, and Thursdays were reserved for his free-reed concertina. On Fridays, he played zither, and Saturdays were set aside for banjo music. Unfortunately, Carl was master of none. He could not have been a worse musician if he tried, and he tried.

Rain or shine, Carl would set up his makeshift stage – a refrigerator box folded flat – along with a small, collapsible chair and his donation cup. During the busy morning and evening drive times, Carl would be on his feet, tapping out a rhythm to accompany his tunes, many he composed himself.

On warm days, he could take off his suit jacket and hang it over the back of his seat. His narrow necktie, fashioned into a neat Persian knot at his throat, barely reached the third button of his white shirt. His pants waistband, pulled high up on his torso, nearly reached the tip of his tie. A worn, brown fedora sat at a jaunty angle on his head with wisps of white hair curling around his ears.

Despite his lack of talent, his cup was always filled with small coins and crumpled bills. A favorite of the people rushing to and from their office jobs and high-rise lives, Carl was a little country in a city world. His smile and earnest love of music was enough to make a dreary day bright and a sunny day that much brighter.

He would be in his spot when business commuters were lining up for the Metro and when they returned at night. By six each evening, he was packing up his instrument, his folding camp chair, and his cup.

His first stop was the neighborhood market a block east from his spot. There he would buy a package of powdered sugar donuts and a pint of whole milk. Mr. Nance, the store proprietor, would let Carl cash in his take for the day for larger bills. Sometimes, Carl would also pick up the latest issue of Guideposts and a small tin of lemon drops.

Carl would take his purchases, his pockets bulging with his donations, the tools of his trade in hand, and wait in front of the market for the last bus running on the E line. From there, he would ride the 42 blocks to Avondale Pavilion. At the reception desk, Carl would count out that day’s remuneration, get his receipt, then make his way down the hall to Room 118.

Most nights, Esther would be asleep. Carl relinquished his load and sat in the chair next to her bed. The days he bought the magazine, he would spend his visit reading articles to her. Other nights, he could play for her, soft and low, so not to disturb the other residents. He’d leave the lemon drops on the meal tray for the night nurse, his way of saying, “thank you” to the woman who tended to his beloved Esther.

It was a cold, January Tuesday. My coat collar up and head down, I walked into the wind. I held my $5 bill in hand, ready to drop it into Carl’s cup. When he wasn’t there, I felt a tightening in my throat. Running late for my train, I kept moving. I never found out exactly what happened, but caught the tail end of a television news report that evening about a couple, married 60 years, dying within an hour of each other. The wife had been a resident at Avondale Pavilion, and her husband Carl, a daily visitor, would often serenade her by playing a variety of instruments.

2 thoughts on “Will play for tips”